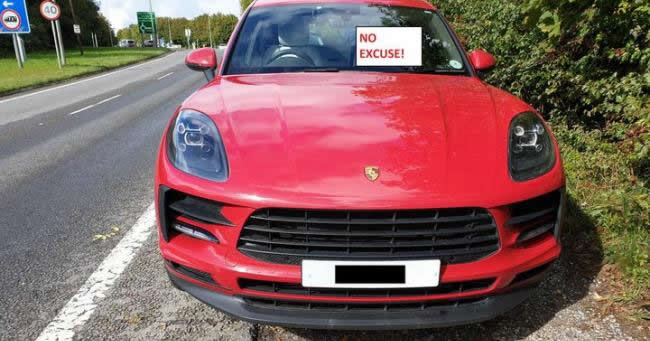 A PORSCHE driver was fined by police for having illegal number plates.

He was stopped by the force’s No Excuse Team because the characters were too small and there was no central space between the letters.

A spokesman for the team said: “The number plates also had no British Standard mark or manufacturer postcode – both of which should be present.

“The driver had purchased their plates from one of many online sites who invariably have no interest in what the plate is used for.

“The driver will usually be the person fined, as they’re responsible whilst using the vehicle on the road.

“Recently we’re seeing too many non-conforming ‘show’ plates, where characters and spaces are moved or altered (eg to represent a name) or darkening film has been placed over the plates.

” These alterations will attract the same £100 fine that the above driver received.

“Front number plates propped in windscreens also seems to be a trend; if the number plate cannot easily be read from the front of the car, this is an offence that will also likely cost the driver £100 each time we stop them.

“Vehicle registration numbers are owned by the Secretary of State and are provided to the vehicle, not the owner.

“When you purchase a personalised (private) registration number, you buy only the right to apply to put it on a vehicle.

“If you do not display it in the correct manner, you risk being fined by police and DVLA and even having the registration permanently withdrawn.

“DVLA are very clear on the format of number plates… full information including their downloadable guidance leaflet INF104 can be found at: https://www.gov.uk/displaying-number-plates”

For a fully road legal, professional looking number plate get in touch today for a quote at: sales@zell-em.com.